Hello, everyone!
First off: We want to thank each and every one of you for being with us in this long and tedious journey! Without you, the user, we would have not been to go as far as we have come today.

Since it's Polytoria's birthday, what better way to celebrate than to go through all the events, celebrations and show everyone what we were when we started altogether? Without further ado, let's get started!

First we need to look back into our first year, 2019.
We were a pretty small project with around 500 users in the first few days.
The website was in the works and our name wasn't Polytoria. Our brand was called Bloxtopia.

Here are a few screenshots of the website from back then to give everyone an idea of how simple we were compared to today.

And here we have a picture of the old avatar from around that time.

If you are wondering how the client used to look like in 2019 / Early 2020, well it was still lacking a lot of features but it was still playable. Here are a few pictures.

The old game client was still pretty wonky, and it lacked a ton of features now present in the modern day client.

Soon enough, all of this would evolve into what was known as Superium.

But before we delve into Superium, I want to show everyone that our current day website as of April 2021, slowly developed from Bloxtopia! Let me show you a few cool screenshots.

We also added reactions to wall posts, but they never got into the final website.

We rebranded the old website into Superium, time passed, updates went by and then we got by a new website layout! This is the website layout that existed before Polytoria's release! A lot of people might remember this, take a look!

Alongside Superium's new website, we also just pushed out a new type of Humanoid avatar, which looked like this.

A lot of things that you saw in the present day client still date back to Superium, with the familiar game client with the black bar at the top.

Superium grew a lot in this time period, with a lot of today's popular users joining around the time we were still called Superium.

Everyone was enjoying Superium, but there was something in the works... The staff team tried desperately hiding the fact that we were soon to become what we are today – Polytoria.

It slipped a few times but that wasn't so big of a deal, since the reveal was around the corner. Everyone was hyped for the video on Polytoria's channel called "The future of Superium...", with people spamming their enthusiasm in the live chat around the same time as the video started to premiere.

There were different reactions, some people liked the name change, some didn't, but in general everyone enjoyed the update considering this shined a brand new light on the project. The avatar switched to Blocky yet again, with users being as happier as ever. The new refreshed website and the release of the game client was so awaited, to the point that the server couldn't handle the large amount of users trying to visit the website.

It took a couple of hours to fix but everything was back on track and the client was available for everyone to play, and it still is!

That's pretty much it, I hope each and every one of you enjoyed looking at this little retrospective on Polytoria. 🙂

This is Alex, signing out! 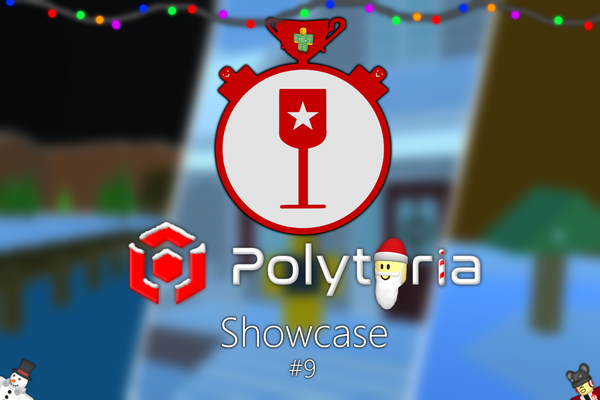 Ho ho ho! Hello everyone, and Merry Christmas! It is I, Santa Bags! I am here today to host a special Showcase, one that happens once a year! I am proud to present to you, Polytoria Showcase, but this month is Christmas Themed! And to all of our winners, like

Hey everyone! Have you ever wondered what your favorite staff member's color is? Or what game do they like to play while they aren't busy? This blog post will solve some of these answers for you guys! Every staff member who is a part of Polytoria will be talking about

Hey everyone! Welcome back to another monthly Showcase. In this showcase, we will be changing the Format up a bit!, Instead of a normal blog post, we will be doing a 🎃Spoooky 👻Showcase! Last month we let people submit topics to the showcase that were Halloween themed and we closed